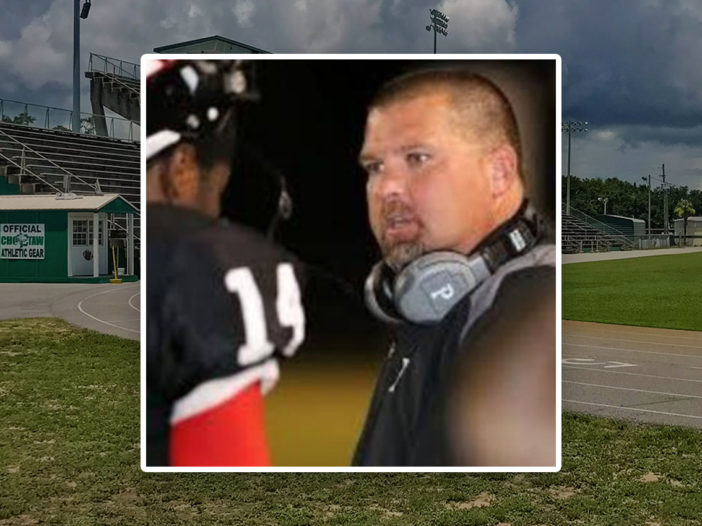 Beasley is a Choctaw Alumni having graduated with the class of 1995. He served as Head Football Coach at Dunnellon High School in Florida from 2005-2014 and is the current FHSAA Athletic Director where he oversees football, basketball, and weightlifting.

“This is a good thing, not only for our high school, but for the community,” said Principal Heck. “Closing out the chapter of Coach Greg Thomas, he has left a footprint here at Choctaw that is tremendous. As we said goodbye to him, we knew that we wanted someone who could impact Choctaw High School in a positive way and in a new direction. Frank Beasley knows what it is like to bleed green, knows what it is like to play at Etheredge Stadium and knows what it like to walk these halls.”

Speaking of walking the halls at Choctaw, the last time Beasley was inside the high school was 13 years ago when he first interviewed for the Head Coach position at Choctaw.

He was the number 2 pick. Greg Thomas got the job.

Last November, Thomas stepped down as the head football coach at Choctaw after 13 years at the helm. Now, it’s Beasley’s.

“I am truly humbled,” said Beasley on Tuesday afternoon. “As a football player at Choctaw, I vividly remember telling Coach Fayard that I wanted to be a football coach. It was my dream job. Greg Thomas built a strong foundation and we look to build upon that. Principal Heck has been outstanding throughout this interview process, along with Superintendent Chambers and everyone at the District.”

According to Principal Heck, Beasley will officially start around the first week of March once he gets through with his commitments with FHSAA. He will, however, make an appearance next week to meet with staff and students.

“Number 1, we are going to build relationships,” said Beasley. “It is important that our kids know what our plan is from the beginning. We will then be assembling the best staff that we can as well as serve our student athletes both mentally and physically. We will hit the ground running.”

For Beasley, Choctaw is home.

“It is one of the most tradition-rich high schools in the United States,” he said. “We will build on the past and bridge it with the future. We have so many great alumni and we will tap into those resources.”

“It’s Choctaw and there is no better place,” continued Beasley.