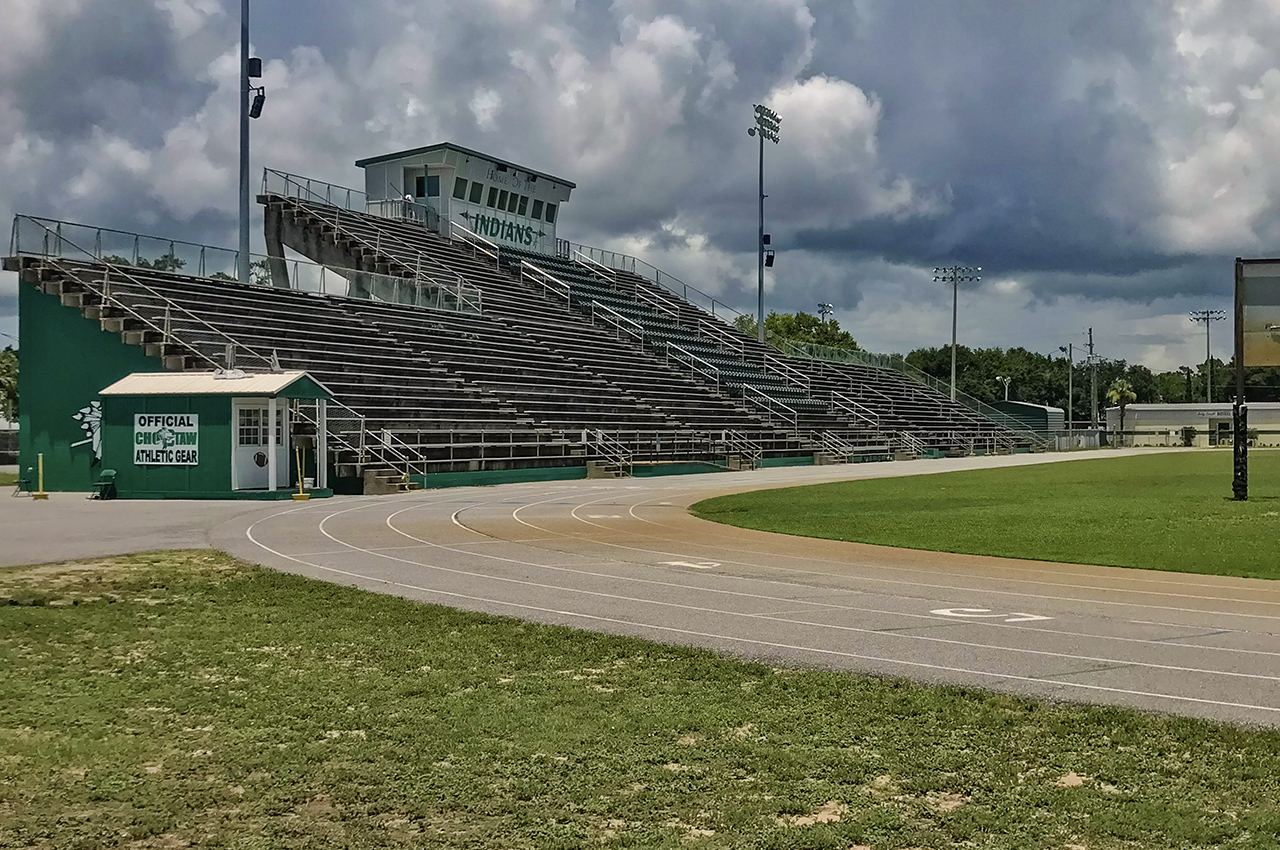 Choctawhatchee High School is facing a problem. Joe Etheredge stadium is eroding due to the Gulf air and has been deemed unsafe for public usage. As of right now, the stadium is closed and off limits.

This isn’t the first time that Etheredge stadium has faced erosion problems. Just two years ago repairs were made to the concrete on the Visitor’s side.

As we approach the new school year, we have to think of how it will affect games not only for Choctaw but for Pryor Middle School. It’s been confirmed that while Choctaw has season ticket holders, they’ve not begun to sell season tickets without having an official plan of what’s going on. Not to mention that Choctaw is having to explore working with other schools to use their field on away games.

At last Thursday’s School Board workshop, Assistant Superintendent Steve Horton spoke to the school board about the current issue and the fact that putting band-aids on the stadium is not a long-term solution. The bigger picture may be needing to consider building a new stadium.

“Our timeline is critical here.”

“At this point in time, we have a group of engineers who have visited the school”, said Horton. “Once with our own folks up on the lift and then again, I think are sending another team back. We expect to have the specs and plans for a mediation by the 26th or 27th of July. So our timeline is critical here.”

Given that the start of the new school year is roughly a month away, they would likely need to consider an emergency bid to get some work begun on the stadium sooner.

“We’re working directly with Mrs. Heck. They’ve got a Kickoff Classic that occurs at the beginning of school that they’re making arrangements for. Their next home game is September 6th. So obviously as we, and as Mr. Chambers has said, the other high schools have reached out and offered to coordinate when they have an away game that, that that could potentially be a solution.”

“We’re not abandoning Choctaw and the Memorial Stadium there. We’re just not sure of the timeline yet for repairs. The early indication is that potentially the Visitor’s side, and potentially the ends of the Home side, may be able to be remediated sooner. And so if that’s the case, and again, working with Mrs. Heck, she’s developing plans with our Athletic Director and staff to make some decisions about what they are wanting to host.”

There could be any number of problems

The other piece of the equation is the press box. The press box is actually separately supported from the large bleacher section on the Home side. When the engineering results come back, along with the remediation piece, there could be any number of things that come out of that.

Additionally, the restrooms in the stadium are located under the Home side and the Visitor’s side. Any process would have to include making sure that those were safe to be used as well.

“At the end of it all we want to make sure we have a sign off that attests to the safety of that facility before we allow the folks on it,” said Horton. “We do have portable bleachers in the district and so obviously Pryor is a school that uses that facility as well on Thursdays in the Fall. So we’re making sure we’re touching base with Ms. Barron so that all of the schools that are involved understand kind of where we are. And I don’t have a timeline to give you other than the fact that we believe we’ll get some information to do an emergency bid at the end of the month.”

The stadium is aging. As Mr. Horton said, “you can look to repair something for so long and then you probably run out of reasonable repairs without really expending a lot of funds.” The bigger picture here is figuring out how to fund a new stadium.

As Mr. Horton finished speaking to the school board, Dr. Lamar White added,

“I mean basically we’re broke. We’re not loaded with a lot of funding and the public needs to hear this. And in Bay County, of course, they had a half cent sales tax. They were able to fund their operations and we don’t have that.”

But here’s the thing, the School Board had the chance to try and get voters to approve a half-cent sales tax like they did for Okaloosa County. Per the Northwest Florida Daily News, “The board voted to postpone the sales tax referendum due to the negative publicity surrounding the administration of School Superintendent Mary Beth Jackson.”

“That’s right,” said Linda Evanchyk, “And that’s what I’m saying. The public needs to hear this. I hope they’re watching. Maybe football will get their attention, the lack of it or changing it.”

Next school board meeting

The next school board meeting is scheduled for Monday, July 22 at 6pm.