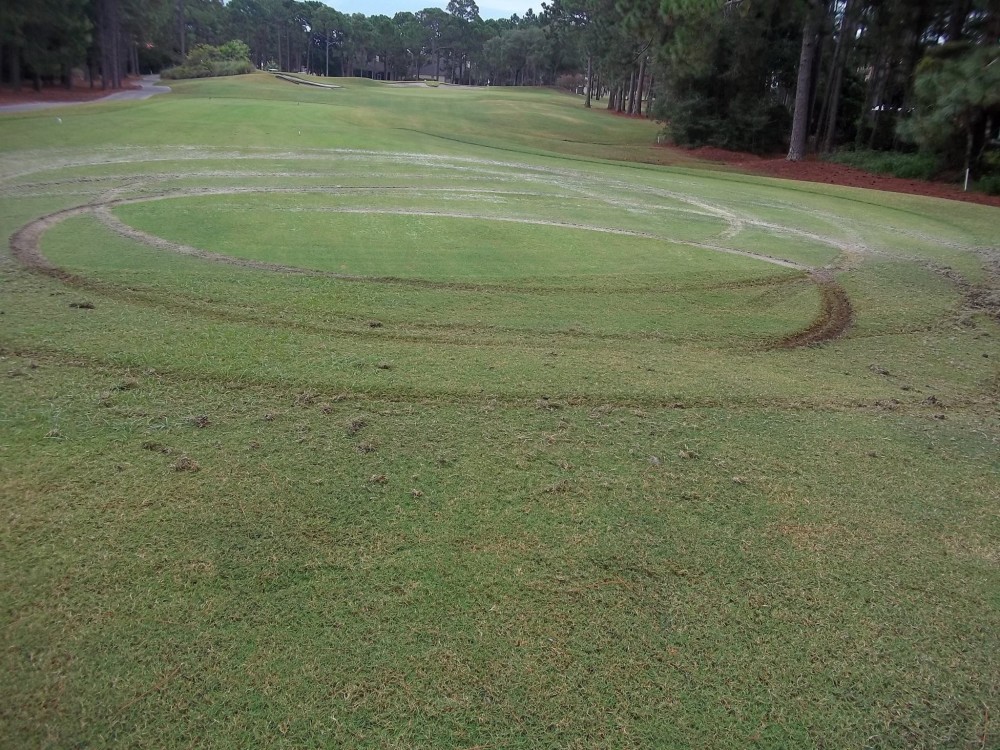 On Saturday, August 29th, 2015 Walton County Deputies responded to a call for service at Sandestin Beach Resort in reference to criminal mischief.

Upon arriving the deputies spoke to the golf course’s head of maintenance who located 3 areas of damage to the courses while doing routine morning checks.

Looks like someone drove onto the green and decided to do some “doughnuts”.

Damages to additional tees and greens tallied up to more than $15,000!

According to one witness report, around 10 p.m. on Friday, August 28th, 2015 they saw a “vehicle with one headlamp on the golf course and could hear a loud exhaust.“

On Tuesday September 1, 2015, at around 3pm, WCSO investigators were advised through an anonymous tip that a juvenile had been bragging about committing the vandalism.

After some investigation, it was determined that the 17-year-old lived on the property. Investigators found a vehicle in the driveway matching the description witnesses gave deputies.

The mother of the juvenile was contacted and she gave investigators permission to examine the vehicle further and speak with the suspect.

According to WCSO, the tires measured 9″ wide matching that of the suspect vehicle and golf course style grass was also found in the rear fender wells.

At first the juvenile denied involvement in the incident but then admitted post Miranda he had committed the offense. He admitted knowing that driving on the golf course would cause damage to the grass, but stated he was “bored.”

The teen was arrested for felony criminal mischief, a third degree felony, and transported to the Walton County Jail where he was released to his mother per the Department of Juvenile Justice.

The Walton County Sheriff’s Office is choosing not to release the suspect’s name because of the absence of a criminal record; however it will be made public upon request to our records department per Florida Sunshine Law.